"Happy Everything to Everyone!" Adventures in Corporate America 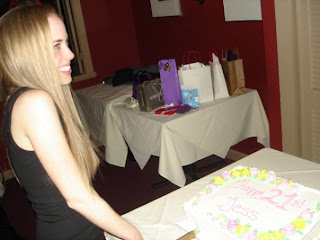 To pay my bills right now, I work several jobs, one of which involves the occasional on-site meeting in a very corporate environment. Today included such a meeting, complete with a 12:30 break for cake (hah, that rhymes) in the Career Services department. At 12:34 exactly, a straggler knocked on the conference room door.

“Oh, is it…time?” my supervisor said.
My stomach was growling for real food, and I just wanted to get through the meeting as quickly as possible so as to obtain said real food, but I mean, I’m just the lowly hired ghost-writer. And who am I to turn down free cake anyway? 12:30 is just a really awkward time for baked goods.
When we walked down the hall, there was a substantial crowd gathered about a substantial cake on which was written: HAPPY 27th ANNIVERSARY MARY BETH, LESLIE, JOHN and HAPPY BIRTHDAY TERRY.
5 candles, which Terry himself blew out as everyone clapped. Wax flew
“Happy everything to everyone!” Leslie sang, a hint of sarcasm in her voice (love her).
Terry’s vibrant handling of the knife kind of reminded me of me at my twenty-first birthday party (see above), but that’s another entry for another day.
What really got me was how excited (!) everybody was to have cake in the middle of the workday. Like, wow. On the one hand, I wish that did it for me, but on the other…
My supervisor joked that instead of food, maybe the company should commemorate stuff by handing around cigarettes and letting employees get the hell outside for a few minutes. Those weren’t her exact words, but cigarettes were mentioned in that context.
I know that when I’ve worked regularly in offices, I’ve made sure to take “imaginary cigarette” breaks. Sometimes you just need to get the hell outside. Why do you need a carcinogenic excuse?
I’m not putting down birthday cake—I had a few bites of the frosting, and it was pretty good. It just bummed me out to see so many adults so excited about it.
There’s a whole slew of studies and info out there about how you eat more in groups and at celebrations, and I can only imagine how it could add up if you work in a company with a lot of employees where you’re expected to “participate” in office activities. That can be a lot of pressure, regularly having multi-layered cakes languishing in front of you, taunting, participate…eat me…
I guess the same goes for co-workers with candy jars or people who leave sweets in break rooms, etc. Some people have a hard time saying no even when they should be making more of an effort to say yes to healthy foods that will actually give them energy to get through their day.
Still, it kind of took me back to snack time in kindergarten, which is a much more functional practice that totally shouldn’t have gotten taken out of the agenda after the age of 6. As adults, our perception of what a snack is can be pretty warped. When did juice and crackers give way to monmouth pastries and sugary drinks?
I also wish we could bring nap time back. And recess. I think that would do us all some good. Getting enough rest and outdoor time makes for a happier, more efficient worker, in my humble opinion.

This entry was posted in Uncategorized and tagged cancer, dessert, wellness, work.