I may be an omnivore, but I still believe most of us are best off when we eat primarily plant-based foods, with small amounts of animal sources of protein if appropriate. It’s kinder to our bodies and to the planet—not to mention the other animals that live here! If you’ve been with me awhile, then you know I like to practice what I preach.

The folks at Everyday Health recently sent me this infogram on vegetarianism. Note that even following a “semi-vegetarian” diet reduce your risk of serious health conditions. Flexitarianism, anyone? If that sounds like your bag, you might dig Mark Bittman’s VB6 approach too!

What are your thoughts on plant-based diets? Any favorite meatless recipes?

This entry was posted in Uncategorized and tagged flexitarianism, Mark Bittman, vegan, vegetarianism.

“We fell in love in a meatless place…”

So yeah. After seeing this on Jenn’s blog and laughing my ass off, I needed to share.

A few things for Thursday

I don’t know about you, but I feel like this week is flying. Hope you enjoyed Wednesday’s WIAW randomness. Sometimes when I’m really busy, it’s way too easy to hole up every night in front of my computer, click-clacking away at some work assignment or other instead of catching up with friends or tending to domestic matters. I keep a clean apartment, for example, but it happens in bursts.

The other night, even though I had work to do, I managed to make a batch of lazy-person’s brownies. All you do is add ~3/4-1 can of pumpkin to brownie mix, bake according to the directions, and enjoy. Most of these went in the freezer, but I left out a few of course…

Wednesday, after a full day at the hospital, where the highlight of my day was sneaking a photo of these fellas at lunch (the juxtaposition of the traditional robes with the sterility of a hospital cafeteria tickled me—what can I say?), I met up with a friend for an early dinner.

I’d heard great things about Peacefood Cafe, so we decided to check it out. I’ll be honest—I really, really wanted to like it. However, I also have to acknowledge that my stance on vegan restaurants has changed in the past year since I:

Anyway, I ordered the Peace Bowl—brown rice topped with 3 different kinds of roasted veggies and served with ginger scallion oil. I added tempeh on top for an extra 3 bucks because, well, protein. 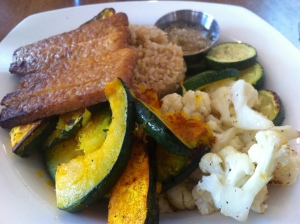 It was really good, but I wasn’t wowed. Granted I didn’t order the most exciting thing, and I’m sure that some of the other options would have been more interesting. However, I left feeling, like, “Gee, I just spent twenty bucks on something I could have made just as well at home. ” I was satisfied, sure, but that much fiber in one meal is going to satisfy you no matter what.

When I got in the elevator, coming home, an elderly Japanese woman announced that she’d just eaten an entire lobster. I was kind of jealous. And by “kind of,”  I mean “very.”

At least I had brownies to look forward to for dessert…

Have you ever had an underwhelming meal at a place you were told was amazing? What was it like?

Happy Monday! How was your weekend? For the most part, mine was pretty mellow. I caught up on stuff and then spent Sunday afternoon visiting my sister in her new neighborhood.

I don’t get out to Hoboken very often, but something tells me I might be making the trip a bit more now.  It’s been way too long since we lived near enough to hang out via public transportation. After checking out the new digs we got lunch at a restaurant nearby. We did a lot of walking around and soaking up the sun. It felt good to sit outside and have a glass of wine with lunch and just talk about life and stuff.

It still amuses me that people think I’m a vegetarian. I only tend to crave meat once a month or so, but I believe in paying attention to those cravings. When I started this blog over 3 years ago, I was getting quite a bit of pressure to stop eating meat and wasn’t listening to my body as much, but that didn’t work out so well.

If nothing else, in the grand scheme of things, I’d rather have adequate iron stores.

Do you live close to your siblings? What foods do you crave sometimes?

The Ethics of Eating Meat (in 600 words or less)

This weekend, the New York Times Magazine ran the winning entry in a contest in which participants were asked to discuss the ethics of eating meat in 600 words or less. The winning essay, by Jay Bost, and the essays that ranked as finalists are definitely worth a read.

What do you think about these essays? What are your thoughts on the ethics of eating meat?

This entry was posted in Uncategorized and tagged meat, NY Times, vegetarianism.

It took me a few months to get used to cooking for one person, and after a week at my internship, it’s pretty clear I need work on learning to cook for one very busy, rarely-home person. I hate wasting food, but I had to throw a few things away last week. True, it was only some leftover brown rice and roasted veggies, but I hate wasting food.

Something I’ve been playing around with recently is halving recipes. Saturday’s muffins turned out pretty well, and on Sunday, I made a mini version of a seitan log.

Yes, this is basically the ugliest thing ever (and dirty hippie food at that), but it’s tasty, nutritious, and easy to throw into salads, pasta dishes, sandwiches, and more. As I’ve mentioned before, though I’m not a vegetarian (or a dirty hippie—I totally wash behind my ears now), I really do love certain vegetarian foods, and seitan is on that list of weird-but-good.

It was much prettier when chopped up and thrown together with some veggies, marinara sauce and spaghetti squash…

END_OF_DOCUMENT_TOKEN_TO_BE_REPLACED

You know what they say about big claws…

Actually, I don’t, but I have my suspicions…

Well, well, well—check out this specimen. Meet Rocky, a 27-pound lobster caught off the coast of Rockland, Maine last week.

I have to be honest–I have a very complex relationship with lobster. As a child, I was terrified of them, and would scream and run away from the table if anyone was eating one. My sister used to torment me by waving the claws in my face. END_OF_DOCUMENT_TOKEN_TO_BE_REPLACED

This entry was posted in Uncategorized and tagged animals, family, restaurants, seafood, vegetarianism.