I don’t usually buy fancy jams & things, but once in a while I have to make an exception. Case in point: 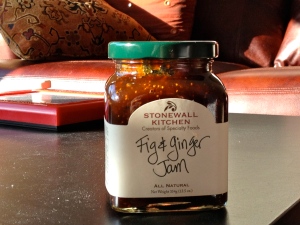 Figs & ginger are two of the food-related ways to my heart, so this found its way into my grocery basket in, like, two seconds.

I love Stonewall Kitchen products, and this is definitely a new favorite! I’ve already tried it on sprouted-grain toast with melted cheese and on top of oatmeal with plum & tahini. I imagine it’s also great in yogurt, on top of pancakes, and used as a base for marinade or salad dressing. My inner mad scientist is looking forward to a little experimentation.

As far as nutrition is concerned, sometimes people ask me what I think about added sugars in condiments, and I tend to feel the way I do about sugar in general:

So if a little spread of your favorite fruit preserves is going to take your healthy sandwich from good to “OMG I need to Instagram this amazingness ASAP,” go for it. Just keep that feeling in mind when staring down the bowl of waxy leftover Easter (milk) chocolate at the office, and save your sweet-time for when it’s awesome. Oh dear. I wish my brain wasn’t so quick to make that into a metaphor…

The Center for Science in the Public Interest just released their annual XTreme Eating list, which highlights some of the most unhealthy foods at U.S. chain restaurants.

Either way, it exceeds the recommended 20 grams of saturated fat and gets quite close to the 1,500 milligrams of sodium per day American adults are advised to consume.

As highlighted in this Reuter’s article, other Xtreme Eating winners for 2013 include:

You can see the whole slideshow here.

What do you think about restaurants serving food with multiple days’ worth of calories, saturated fat, sodium, and sugar?

This entry was posted in Uncategorized and tagged calories, Center for Science in the Public Interest, chain restaurants, CSPI, fat, sodium, sugar.

Is it just me or does this Bouche de Noel look like a pair of boxers? It could just be that I’m unaccustomed to adequate sleep/non-bleary vision, but I don’t know… 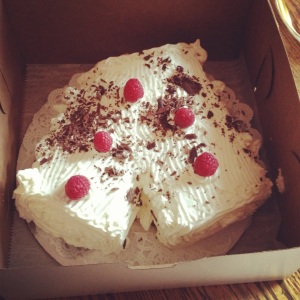 How are you spending your day?

The Power of Suggestion

Every day at lunch, I have a cup of tea (usually green). Interns get free tea, coffee, and fountain drinks, and I definitely take advantage. I don’t know why I never noticed this before, but yesterday, I was looking at the wrapping and got kind of annoyed. Why does the freaking tea wrapper have to include sweetening the tea in the preparation instructions? It really doesn’t have to be sweet to be enjoyable, folks!

What’s the most annoying thing you’ve seen on a food wrapper or package lately?

As reported earlier this week, the American Cancer Society is urging the Surgeon General to conduct a large-scale study of the impact of sugar-sweetened beverages on consumer health, highlighting the role these types of beverages play in the nation’s obesity crisis and the need for an action plan. The proposed study is being compared to the U.S. top doctor’s landmark report on the dangers of smoking that came out in 1964.

“An unbiased and comprehensive report on the impact of sugar-sweetened beverages could have a major impact on the public’s consciousness and perhaps begin to change the direction of public behavior in their choices of food and drinks,” American Cancer Society Cancer Action Network wrote.
What you like to see a major study on the impact of sugar-sweetened beverages on public health? What do you expect the findings would be?

In which Frank Bruni calls it as he sees it

In this Sunday’s New York Times Review section, Frank Bruni responds to Bloomberg’s proposed ban on sales of large portion sizes of sugary drinks. In his essay, “Trimming a Fat City,” Bruni, who has written about his own struggles with weight and his relationship to food, makes a case for the ban. It’s definitely worth a read!

My friend JR sent me this yesterday. Who needs to use sugar packets to quantity how bad something is for you when you’ve got Cadbury Cream Eggs?

I like the first bite, but then my tastebuds rebel against the sweetness and I give up and wonder why I didn’t remember that I actually kind of hate these things. Happens every Easter…

This entry was posted in Uncategorized and tagged candy, soda, sugar.