Happy New Year! Are you excited for 2014? It’s cheesy, but I am. I hate New Years Eve (which is why I willingly volunteered to work New Years Day), but I love the fresh, clean feeling of January 1st. I always try to make good choices to inspire more for the 12 months ahead, and I try to sneak a few lucky foods in there.

As we welcome a new year I thought I’d use this week’s  What I Ate Wednesday to pay tribute to the poorly-lit workday meals that kept me going through most of 2013. It’s not always pretty, but hey, sometimes you just have to eat to live. I’m curious to see in what ways my tastes will change—and remain the same in 2014. Not a lot changed over the past year, except that I got over some of my kitchen fears and started paying a little more attention to presentation—at least at home! Packing and eating two desk-meals per day was new, but a welcome challenge. One thing I am hoping to do in 2014, though, is to not have to rely on shelf-stable peanut butter. This coconut oil stuff tastes good and I feel slightly better about it than I do palm oil versions, but nothing beats straight up ground peanuts.

Anyway, let’s get to the “what I ate” part of the post, shall we? As always, many thanks to the lovely Jenn of Peas & Crayons for hosting the weekly link party—hop on over there to see more WIAW from other bloggers!

Here’s what I ate on Monday, which was a bit hellish, as we had less than half our usual staff, but thanks to a new Spotify playlist in my headphones, I powered through all the notes and to-do list items. I had hoped that spending slightly more time at my desk would keep me from getting hungry as soon, but thanks to the morning’s interval workout (something I do once a week instead of the usual, just to shock the system so my muscles don’t get bored), I was just as hungry as usual. One day, I will miss having this problem. 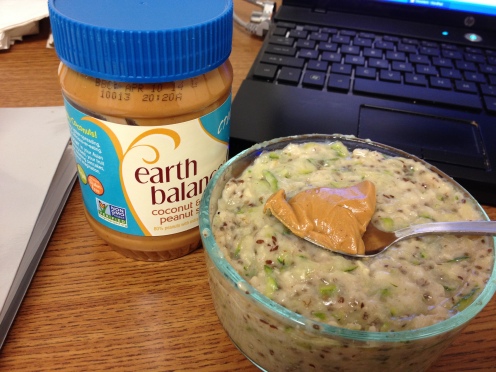 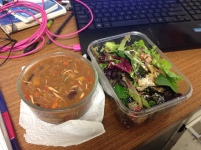 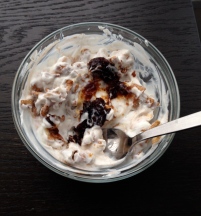 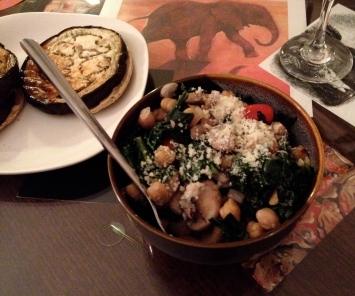 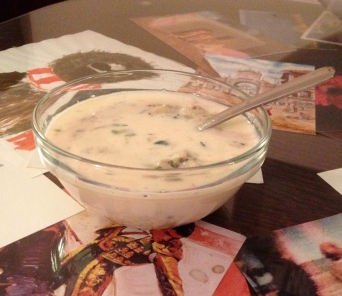 One of the things I love about Jenn’s WIAW link party is the focus on creating a judgment-free zone. It can be so easy to compare ourselves to others, but one of the biggest favors you can do for yourself is to tune in to your body and listen to what it needs—not what you think you should want or what someone else tells you should need. You’re the expert on yourself, after all.

How did your tastes change over the past year?

This entry was posted in Uncategorized and tagged desk lunch, new year, new years, nutrition, oatmeal, What I Ate, What I Ate Wednesday, WIAW, work.

I used to HATE pickles, but this year I discovered they’re pretty good! I come in from a run and go straight to the fridge for an olive or a pickle-salt much? A lot of my tastes have changed this year, and stuff I couldn’t stand before is appealing now. And I’m totally one of those people that has to have a fairly full tummy before bed or I’d wake up ravenous in the middle of the night instead of right and early at 6AM. Glad I’m not the only one!

Haha that reminds me it’s been way too long since I’ve had pickles. So good!

I got a food processor this year and it has made all the difference with nut butters, I really enjoy almond and hazelnut butter as well as peanut butter, and sometimes i add other ingredients as i grind the nuts down (vanilla extract, unsweetened cocoa, cinnamon.) Once I added a teaspoon of milk and oil and ended up with something close to the consistency of cake batter.

I like coconut and zucchini now. I still don’t like cucumbers! I also love that your header is perfect for New Year and all year long!

In the past year I’ve come to like SO many more foods! Avocados especially. All of these eats sound super yummy!!

Love that! Yes, I used to hate avocados. I don’t think I saw the light until I was in college—I had no idea I’d been missing out !

I’ve never eaten mustard in my life but now all of the sudden I want it all the time. But I think that’s because I’m pregnant and my husband LOVES mustard so our child must, too. :p

Haha that is awesome—congrats. Genetics are a strange, beautifully hilarious thing, no?

All your meals sound delicious, especially the zucchini bread oats! The Earth Balance coconut pb spread is one of my favorites.

I also must have a snack before bed or risk waking in the middle of the night starving! I have half a larabar or handful of nuts and a cup of greek yogurt most nights and it does the trick for me.