Hooray for the USA

So…I spent last Fourth of July day-drinking in Brooklyn, and this year, I’m basically doing the opposite. Since my benefits don’t kick in for another month, I’m working again. I’m not the hugest 4th fanatic (if I had to “pick” a holiday, it’s probably Thanksgiving, shady history/carnage aside), so I’m actually okay with not falling behind in my work because of a random day off.

Still, nothing says, “Hooray for the USA” like breakfast and lunch meal rounds in which you get to see the awesomeness of our healthcare and food systems at work. At least a few of my co-workers are there too. Oh, and I have blueberries. New Jersey-grown blueberries from Trader Joe’s, at that. 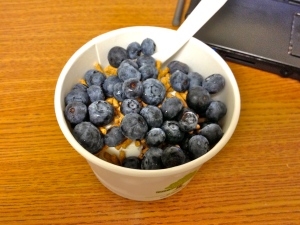 I actually do have fun plans this evening that involve dressing up in 1940’s style garb and gathering with a bunch of other dressed-up folks on a rooftop. I’ve already accepted the fact that I may be a little sleepy tomorrow, but if there’s any time a gal needs to put on something sparkly and dance like it’s 1943, it’s in the middle of what could easily be called the most stressful week of the year (gotta love state surveys). Mercury retrograde is having a ball this time around, so why shouldn’t I?

Also, this recipe for no-bake s’mores looks awesome. If you have a reason (or even if you don’t) these would make a delicious summer treat! Totally worth skipping that next beer for…

What are you up to this Fourth of July? What was the last time you dressed up?

2 thoughts on “Hooray for the USA”

There is nothing better than a Jersey blueberry (or tomatoes or corn). They don’t call it the Garden State for nothing. As for the last time I dressed up, it may have involved knee socks and a plaid skirt. TMI?

Haha no such thing as TMI on this blog. That’s awesome!