What I Ate Wednesday #107: Sunday Funday

Yikes. I just said “Sunday Funday.” Who am I? Someone who occasionally uses “Sunday Funday” as a blog post title, I suppose. Anyway, though I’ve been tying up a lot of loose ends and getting ready for some big changes that come with a new schedule, I’ve been trying to make the most of my last few weeks being able to set my own hours and declare weeknights honorary Saturdays.

Obviously, by now it is Wednesday again… and time for another What I Ate Wednesday.  As always, thanks to Jenn for hosting. To see more WIAW from other bloggers, visit Peas & Crayons.

Last Sunday was one of those “clean out the fridge” and get stuff done days. I put in a lot of work during the daytime so I could go see a late movie. Was anyone else not really scared by The Shining? I don’t know how I’d gone so long without seeing it, but I’m glad I finally got to cross that off the list. It was also nice to be able to go out for a bite after the film instead of going right home. Sure, I was tired the next day because my crazy morning people genes woke me up bright & early despite an eye mask, but hey. 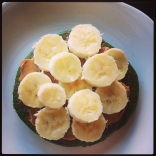 green pancakes=great way to use up extra spinach 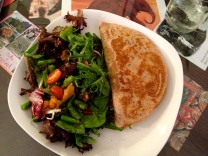 What was the last movie you saw in theaters? Last late-night bite?

What kind of cereal is in that yogurt bowl…it looks yum!?

Barbara’s Puffins. I’m working my way through a box of the “original” flavor, but the peanut butter one is awesome!

Thanks…I’ve seen those at Whole Foods I think.

[…] the last 2 months), I’ve been alternation between this (with egg whites) and this, with an occasional green-pancake breakfast when I have extra spinach to use up. Over the winter, savory oatmeal was my […]