Thoughts on Bacon and Chekhov’s Gun

I’ve written about bacon before—including some researchers’ theories about whether humans are hard-wired to crave it, recipes featuring tempeh bacon, spacing out your “bacon meals,” and even a post last week about bacon-flavored condoms. I also once had the opportunity to smell bacon lube, but if you take a step back, it’s certainly an odd thing for someone to own, especially if they allegedly would never use it. Regardless of one’s intentions, that’s just, like, the Chekhov’s gun of “Sexual Well-Being,” to borrow a phrase from Drugstore.com.

The fact that I don’t understand what it’s like to have a bacon-tooth has very little to do with my being an RD and more to do with, well, not having a bacon-tooth. As long as you’re not eating 28 strips of bacon on a regular basis (a few strips over the course of a week is way more realistic), I think it can be fine. Still, I’m endlessly fascinated by food cravings and preferences. Why, for example, do I have a chocolate-and-red-wine-tooth but my friend goes weak in the knees for a plate of cheese? Why do some people love salt and others loathe it?

I woke up today needing to eat tempeh—so I went out and bought some and threw it in salad for lunch. Other times I can’t stand the idea of tempeh! So what gives, taste buds? Because I was also craving avocado hard-core, I mashed some up and spread it on toast. Now that is something I could probably eat every day and never get sick of. I have an avocado-on-toast-tooth. 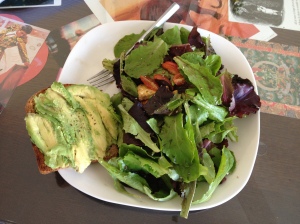 I could throw a bunch of Science at you and talk about certain biochemical reasons we might gravitate to certain foods, but that would be boring. And besides, physiology is only one part of the picture. There’s a lot to be said for memory, emotions, and other factors.

It’s Friday, it’s spring—you have better things to do than read a lengthy blog post. I’m curious to know, though: what are your most common food cravings?

5 thoughts on “Thoughts on Bacon and Chekhov’s Gun”

I don’t really crave anything, is that strange?

Haha that probably means you have a pretty balanced diet!

I do have a pretty run-of-the-mill sweet tooth, but ONLY after dinner. I could be at the most amazing vegan bakery in all the land during the day and would not even want to touch any of the treats. The thought of sweets during the day just grosses me out.

I do crave greens. And I don’t mean that in a holier-than-thou way, I just legit crave greens every day!

I’m actually the same way. I think that for me, I see food as fuel to get me through the day, and sweets make me want to fall asleep if I eat them in the afternoon, especially if it’s in place of a “real” snack or something. I Definitely like a little something sweet after dinner. Haha enter fruit and dark chocolate…

[…] like oatmeal (though I’ve been eating a lot of this recently) or omega-3s or even things like bacon or what you should eat after sex, but over the course of the past few days, my family and friends […]