So I know the month is already almost half-over, but can I just say I can’t believe it’s June already? I always associate Fathers’ Day with summer, and it totally just crept up on me. I’m spending the day with my family, and in the same vein as last year, I have a post on my dad’s favorite foods.

To make a long story short, my dad and I basically have opposite eating habits. I feel weird if my plate doesn’t have at least 3 or 4 colors on it, whereas he’s totally comfortable with sticking to brown & beige. My dad grew up eating stuff like instant mashed potatoes (“real” ones, when he was dating my mom, were a total revelation), canned vegetables, white rice, canned gravy, and white bread. I was spoiled by a mom who’s a fantastic cook and who always encouraged my sister and I to try new things.

Still, I have to give my dad major credit for trying to like green stuff! I love that he’s at least curious enough to ask me questions—and that he tells me the truth about the fact that he’s just never going to like kale.

A few of my dad’s favorites:

He’s very proud of the time my mom tried to cook him, like, tofu and brown rice, and when I (the ever-curious toddler) asked what was on his plate, he said, “Something Daddy doesn’t eat.”  He giggles every time he tells this story. It’s kind of endearing.

I can basically guarantee my dad would never eat this. 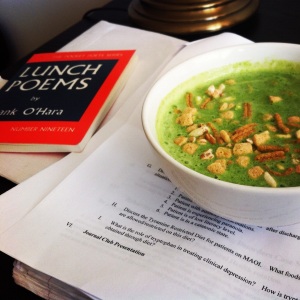 My dad is also very proud of the time a priest gave him the requisite pre-wedding survey on religion. When he got to the part where it asked what his thoughts on Jesus Christ were, he wrote, “Infrequent.”

I won’t lie, I kind of love that story too. My dad is who he is, no apologies, no bullsh!t. What can I say? He taught me all my best swearwords, even if that wasn’t his intention…

So, Dad—even if I do still cringe whenever I think of that time you told me Jules and I were the best things you ever made, I love you. Happy Fathers’ Day!

This entry was posted in Uncategorized and tagged family, holidays, New Jersey.

My dad and I have totally opposite eating habits as well! This seems more common than not?

[…] all have birthdays within the same few weeks. Yesterday, I went out to New Jersey to celebrate my dad‘s birthday. Whenever I feel old, I just tell myself that, well, gosh—my dad must feel […]

[…] because I don’t make it for myself that often, and her for, well, the same reason, as my dad won’t eat it. This time, we were both in the mood for it. I went with the grilled branzino, and we split a side […]