This time last year, I felt like I was falling apart.

As if knee pain weren’t enough, I was on antibiotics for a really painful UTI (TMI, sorry) and felt like I was going to throw up every five minutes. Just when I thought it couldn’t get any worse than feeling creaky, nauseous, and spacey, the yoga class I took to calm myself down took a bad turn when I attempted a new pose I just was not ready for.

I came right out of it, but I knew something wasn’t quite right. It took a couple hours for the pain to set in, but I will never forget lying in bed writhing in pain. My back and forearms were killing me. I’d never felt anything like that before, and I totally admit to crying.

While my back felt better after a few hours, my forearms ached like something I can’t explain. After a couple days of carelessly trying to work through the pain, I bought a wrist brace and tried to avoid lifting heavy things and other movements that might make it worse. I went to see a sports medicine doctor at the Hospital for Special Surgery. After X-Rays and an exam, she told me if was likely a stress reaction and that the pain would subside in a few weeks.

Well, it didn’t. At least not entirely. Gradually (very, very gradually), my arms began to hurt less. I worked with a fantastic physical therapist, who showed me how to strengthen my knee and my core so that when I went back to yoga—and in my day to day life—I would not have to rely so much on my arms. Apparently, it was overuse and poor posture that had made me so susceptible to injury in the first place.

It took months of stretching, strengthening, and patience, but in January, I was finally able to start doing yoga again. I can’t tell you how amazing it’s been—it feels like a completely different practice. I never used to get so much out of it, mostly because I always tried to power through and get it right like a good girl. Relearning how to honor my body wherever it’s at on a particular day and to fully enjoy those few moments of savasana before getting up to face the rest of the day has been a wee bit life-changing. 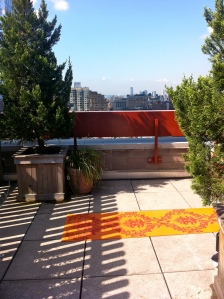 This morning, to celebrate being injury-free, I slapped on some sunscreen and went up to the roof of my building, where I enjoyed an hour of glorious yoga under the open sky.

While it’s too bad it took an injury to get me to such a good place, I’m still grateful.

This entry was posted in Uncategorized and tagged injury, New York, yoga.

One thought on “Injury-Free”

[…] who taught me to focus on staying strong to avoid getting hurt. For better or worse, it was a really crappy arm injury a few years ago that caused me to take a step back and redefine my relationship with exercise and food—and to […]