After yesterday’s Cadillac event, Chris and I recharged for a few hours before going to a party at our friends’ place in Brooklyn. The Empire State Building was all lit up in rainbow lights in celebration! I tried to take a picture, but it’s a bit hazy. Just trust me about that tiny glimmer of rainbow in the distance ; )

It was fun to stay out past my bedtime and catch up with some favorite people I don’t get to see enough. I don’t think the half of a beer I had is responsible for the crazy-ass dreams that woke me up around 4 and inspired me to play a few really dumb Words With Friends moves in an attempt to settle down and go back to sleep, but I felt lucky to drift back off and wake up around 9 feeling well rested.

We had plans to head out to NJ for a belated Fathers Day Dinner (Linner was more like it), so I started off with what has quickly become my favorite summer breakfast.

I know they’re not everyone’s cup of tea, but I’ve been craving them like crazy. The other day, Chris delighted in pointing out how weird-looking my smoothie was (that one was blackish ’cause it had blueberries), in the spirit of “are you really gonna eat that?” Haha poor guy—I growled at him like he’d just told me I had cooties or something. He does have a point, though…there’s only so much you can do to dress up a bowl of goop, no matter how good it tastes.

What started off as a mellow walk around the neighborhood became a leisurely shopping trip. I’ve been on the lookout for a maxi dress that actually flatters the under-five-foot crowd, and I finally found something I liked at Forever 21. For trendy stuff, I’m totally fine getting something on the cheaper side.

I got home just in time to change into my new dress (come on, I’m not the only one who does that) and then met up with my Aunt, Jenn and her fiance Brent. They live in Cambridge, so I see much less of them now that I live in NYC. It was really fun to catch up on the ride out to NJ.

As is usually the case when we go out to visit my family, there was a ton of food. My mom made a grilled vegetable salad, grilled corn (seasoned with butter and cayenne), and pasta to go with the eggplant parm, sauce, and meatballs she’d picked up from a local Italian deli. 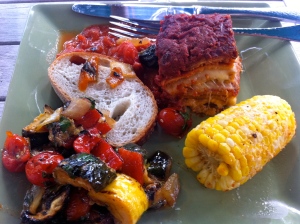 Even after the ten of us had had our fill, there were plenty of leftovers to go around. For dessert, there was ice cream and homemade orange cheesecake and whipped cream. Sadly, I was too lazy to take a picture, but trust me—it was gorgeous! Sadly, I did not inherit my mom’s dessert-making skills. At least she hooked me up with some of the candied orange peel in my doggy-bag.

It was so nice to spend some time hanging out with my family by the pool, just talking and relaxing.

I am also now in the possession of this hilarious book! I’m not sure what it means that my aunt thought of me when she saw this book on creepy-ass dolls, but I kinda love it.

What was the best thing you did this weekend? Do your relatives ever give you funny little gifts?

This entry was posted in Uncategorized and tagged family, New Jersey, New York.