My dad and I have basically opposite tastes. He’s one of the more carnivorous people I’ve ever met. Whereas my plate is often filled with lots and lots of green and orange and yellow and red, his is mostly brown and white, red if you count ketchup or marinara sauce. When Chris and I were first dating, I not-so-secretly think what baffled him most was this new guy’s longtime vegetarian lifestyle. It took a few years before he stopped asking if he ever misses meat!

He wasn’t trying to be a jerk—vegetarianism is really, truly weird to a lot of people. My dad comes from a real meat-and-white-stuff family. When he was my age, I’m pretty sure granola was still something only hippies ate. I think if his father, my grandfather, had been more with it in his last few years (in which he referred to Chris as Scott much of the time), he probably would have laughed and shaken his glass of Dewar’s in Chris’ general direction—in a good-natured “That’s a funny one—you almost got me!” way, of course.

My dad grew up eating stuff like instant mashed potatoes (“real” ones, when he was dating my mom, were a total revelation), canned vegetables, white rice, canned gravy, and white bread. Still, I have to give him major credit for trying to like green stuff! I love that he’s at least curious enough to ask me questions—and that he tells me the truth about the fact that he’s just never going to like kale. 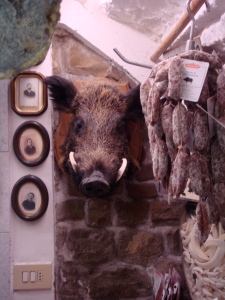 A few of my dad’s favorites:

He’s very proud of the time my mom tried to cook him, like, tofu and brown rice, and when I (the ever-curious toddler) asked what he was eating, he said, “Something Daddy doesn’t eat.”  I think it’s kind of hilarious. I guess that’s pretty similar to what would happen if I tried to cook Chris a plate of eggs and bacon.

My dad is also very proud of the time a priest gave him the requisite pre-wedding survey on religion. When he got to the part where it asked what his thoughts on Jesus Christ were, he wrote, “Infrequent.”

I won’t lie, I kind of love that story too. My dad is who he is, no apologies, no bullsh!t. What can I say? He taught me all my best swearwords, even if that wasn’t his intention…

My parents are in Bermuda celebrating their 30th wedding anniversary this weekend, so we’ll be celebrating Fathers’ Day next weekend.

So, Dad—even if I do still cringe whenever I think of that time you told me Jules and I were the best things you ever made, I love you. Happy Fathers’ Day!

This entry was posted in Uncategorized.

4 thoughts on “For Fathers’ Day: My Dad’s Favorite Foods”

[…] was my dad’s birthday. When I talked about some of my dad’s favorite foods back in June on Fathers’ Day, I mentioned that he loves my mom’s apple pie. Well he […]

[…] my mom has been working on stuff all week. Here’s a an apple pie she made yesterday—this is one of my dad’s favorites, so a family […]